History of the Golf 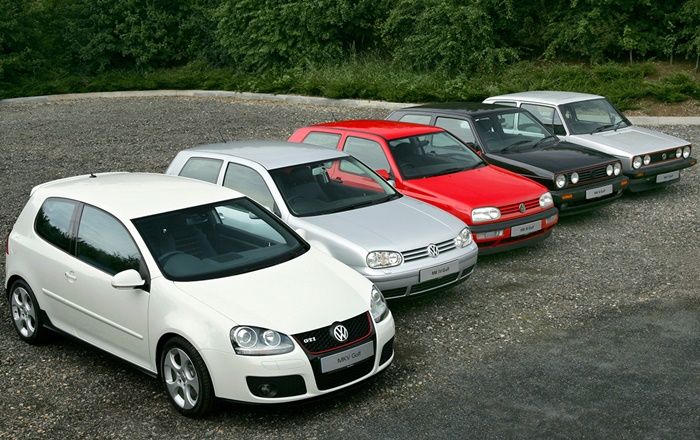 The Volkswagen Golf is a small family car produced by the German manufacturer Volkswagen since 1974, marketed worldwide across seven generations, in various body configurations and under various nameplates – as the Volkswagen Rabbit in the United States and Canada (Mk1 and Mk5), and as the Volkswagen Caribe in Mexico (Mk1).

The original Golf Mk1 was a front-wheel drive, front-engined replacement for the air-cooled, rear-engined, rear-wheel drive Volkswagen Beetle. Historically, the Golf is Volkswagen’s best-selling model and the world’s second best-selling model, with more than 29 million built by 2012. Most production of the Golf was initially in the 3-door hatchback style. The cars have filled many market segments, from basic personal cars, to high-performance hot hatches.

Despite numerous sources suggesting that the Golf nameplate is derived from the German word for Gulf Stream — during a period in its history when VW named vehicles after prominent winds or currents as Jetta (after the Jet stream), Bora (after Bora) and Scirocco (after Sirocco) or that “Golf” is a sport theme-related name as shared with the Polo and Derby— a 2013 report by former VW advertising copywriter Bertel Schmitt, says that — after consulting knowledgeable VW sources including Dr. Carl Hahn, former Volkswagen of America Chief and WP Schmidt, former sales chief at Volkswagen — no conclusive evidence suggests that Volkswagen employed a naming theme for its then new front-drive, water-cooled vehicles; nor that the names trace etymologically to any particular theme; nor that any naming system “was ever announced, either officially or confidentially.

Voted the 2015 Best of the Best by the Canadian Automotive Jury (CAJ), this month brings yet another win for the impressive Volkswagen Golf. The competition was stiff but the Golf beat out both the Ford Mustang and Porsche Macan for first place at the Montreal auto show. Winners of the CAJ are chosen based on the following criteria: style, design (exterior and interior), ride and handling, performance, ergonomics, comfort, space, cargo capacity, fuel efficiency, market significance, and noise, vibration and harshness (NVH). The CAJ is a non-profit organization that is independently funded by 10 jurors, who are renowned automotive journalists and Volkswagen is honoured to accept the 2015 Best of the Best award.

2015 North American Car of the Year

Good things come in pairs. This year both the Golf and Golf GTI were recognized for setting new standards in their segments with the prestigious 2015 North American Car of the Year award. The awards are now in their 22nd annual iteration and judged by 57 North American journalists and experts in the automotive industry. The two Golf models have been acknowledged for their unmatched innovation, design, comfort, value, and available driver assistance.”This award highlights our achievements and hard work in the past year, and we are confident that the Golf family will continue to pate the way for the brand in the year ahead” said Michael Horn, CEO, Volkswagen Group of America, Inc.

February brings another win from Motoring TV for the all-new 2015 Golf as Motoring’s Car of the Year. What makes this award so unique is that it judges the whole lineup, not just individual models. Each model is put into a category where it competes against it’s class based on everything from style, ride/handling, interior execution, comfort, cargo, drivability, value, etc. Having picked the winner from each of the categories, the models are then narrowed down to arrive at the overall Car of the Year. In this case, it was the Volkswagen Golf lineup. We at Volkswagen humbly agree and are excited to add the Motoring TV award to the many wins of the 2015 Golf.