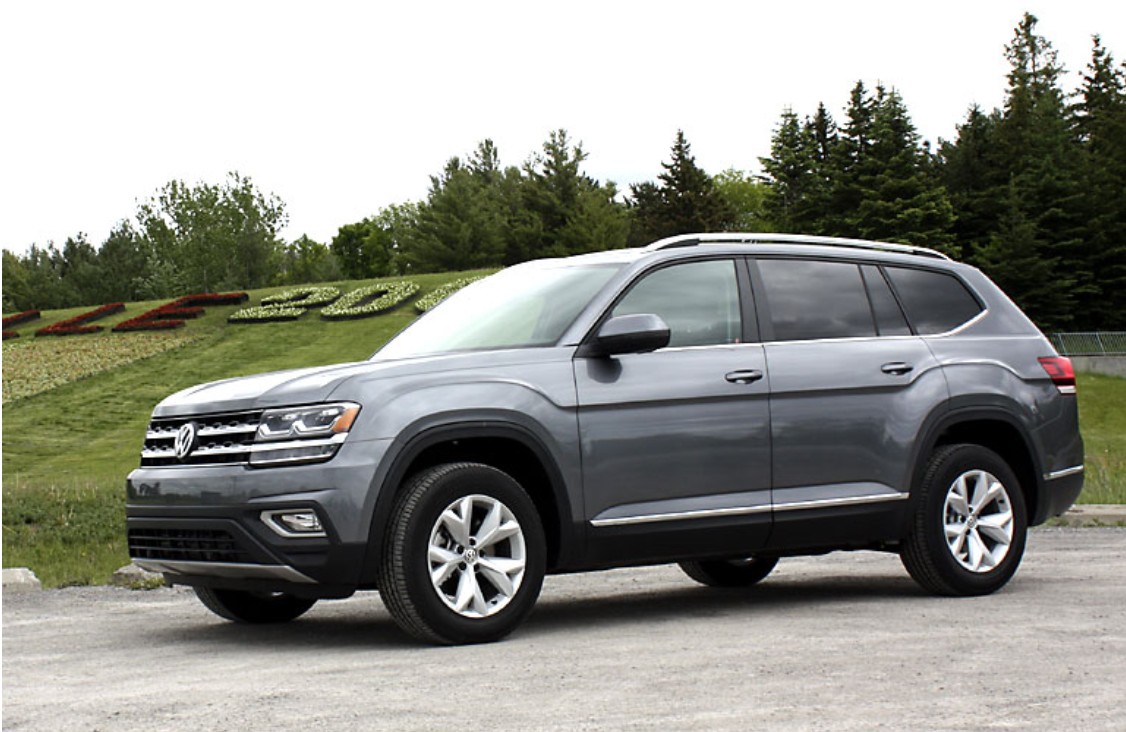 Walking up to the new Volkswagen Atlas puts one thought in your head. Wow, this thing is big—massive by VW standards.

The Atlas is nearly 10 inches longer than the Touareg, and its rear seat does something few of its competitors do: It fits full-size adult human beings comfortably. This isn’t a seven-seater just on paper. Accessing the rearmost two seats is fairly easy, thanks to a middle row that slides and tilts forward.

With a curb weight of 4,502 pounds, the Atlas is also a heavyweight. The 3.6 litre six-cylinder has its work cut out for it, but its 276 hp and 266 lb-ft of torque was more than enough to push the big VW to 100 km/h in just under 8.0 seconds. The 4Motion allwheel drive powers all four corners perfectly.

I slowed to a stop at the first set of lights. The engine shut off. Predictive Start-Stop technology is standard in the Atlas. When it senses the vehicle is stopped, the engine powers down. As soon as my foot lifted from the brake pedal, the engine fired again. No hesitation. (This still takes some getting used to.)

At highway speeds, the Atlas’s cabin is suitably quiet with occasional wind noise as the only real nuisance. You can carry on a normal conversation with your passengers in the way-way back without having to raise your voice.

One interesting feature is the automatic postcollision braking system. The system applies the brakes when a primary collision is detected by the airbag sensors, thus helping reduce residual kinetic energy and, in turn, the chance of additional damage. The cabin itself is function over flash, in typical VW style, with a clean, uncluttered design and simple, driver-centric displays. All but the base Trendline model come with an eight-inch infotainment touchscreen; VW’s digital cockpit with a 12.3-inch display is offered on the premium Execline model. Naturally, in-car connectivity gets a boost; standard App-Connect technology offers integration with the three major smartphone platforms— Apple CarPlay, Android Auto and Volkswagen’s own MirrorLink.

Even with its massive exterior proportions, the Atlas doesn’t feel ponderous from behind the wheel. I was surprised how quick and nimble the Atlas was carving the curves on Bellevue Drive.

The Atlas allowed me to feel a sensation I had never felt before. Cooling seats. Why hadn’t I discovered these sooner? They were put to good use cruising around the streets of Belleville on a 24-degree day.

There are four model options available. Trendline, Comfortline, Highline and Execline. Our tester was a Highline, and it was more than loaded. Some of the key features were a panoramic sunroof, 18 inch wheels navigation, built in WiFi and park assist. A step up to the Execline nets the driver a set of 20″ alloys, Fender Audio, and Volkswagen Digital Cockpit.

I kept the vehicle in the onroad driving mode the entire trip. There is also a snow mode, offroad mode, and a offroad individual mode that lets you tailor some of the settings to your liking.

Adding to a host of innovative technology, is an early detection systems that identifies threats specifically involving pedestrians. It works with the forward collision warning and emergency braking system. The car will brake itself if it senses a pedestrian is going to walk into your path.

I really enjoyed my time with the new Atlas. As a dad with two young kids, I know my future is in larger vehicles. It is reassuring to know that I don’t have to give up good design, nice power and nimble handling.

You can take and VW Atlas out for a test drive at Belleville Volkswagen.